I got the PicoBong Koa Ring for review a few weeks ago. I played with this toy a lot so I could really understand it’s functions. I originally thought this would be a really cool cock ring, but I was wrong.

I asked PicoBong on twitter how I was suppose to use it as a cockring? They replied that it is meant as a “couples pleasure ring”, not a cock ring per se.

This vibrator has 12 different patterns of vibrations available and varying levels of vibrations. To turn it on you just hold down the (+) button which is discreetly hidden in the b of the PicoBong logo on the side of the vibe. Once you get to the highest level of steady vibration, press the (+) again and it will start going through the patterns. The (-) button is hidden in the p of the logo. The (-) will turn down the intensity of the vibration. To turn it off just hold down both buttons at the same time. The patterns are the same as the IPO and offered alot of variety.

The PicoBong Koa is made of silicone and plastic. The silicone has a nice drag to it. Silicone material is only compatible with water-based lubrication. The base of the vibrations can be felt at the tip, but it vibrated all the way to the ring. The vibrations are pretty rumbly instead of buzzy. I was surprised since it only takes 1 AAA battery for power. The one battery will give 2 hours of playtime. The Koa unscrews to reveal the battery compartment.

It is not very strong, about a 3 out of 5 on my vroom scale. I used the Koa as a clitoral stimulator mainly. I liked that it is long enough to stimulate my labia and clitoris during masturbation. The ring makes it easy to hold onto and gave me a further reach during sex. I was able to reach around during sex and use it on his perineum, which is pretty sensitive. I really liked that I could feel the vibrations but they didn’t vibrate my hand while I used it too much. The Koa can be used for insertion either vaginal or anal since it has the ring to keep it from going in all way. It would not be able to inserted very far, only about 2″, and the ring may pinch so use care when inserting. The full length of this toys is 3.75″ with a width of 1″. As a clitoral stimulator I liked the end of the toy for pin point stimulation. The size makes this toy very discreet. The Koa is virtually silent as well. I really have to strain to hear it.The Koa is completely waterproof, just like the other PicoBong toys. Being waterproof makes it very easy to clean. I use a sex toy cleaner but it can be cleaned with soap and water as well.

The packaging was very similar to the IPO. It came in a black box and inside I found instructions on battery insertion and care, the details of the 1 year warranty and a die. The die has a picture of each of the PicoBong toys on it. I guess if you had all 6 toys the die could be used to help you decide which to use. The package could be used as a gift box. 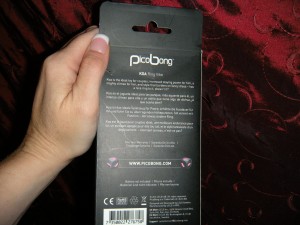 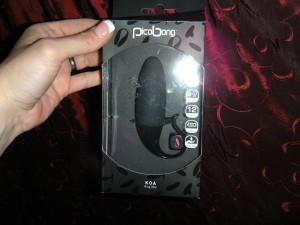 PicoBong has 6 styles of vibes on the market right now. PicoBong is owned by LELO, so it is a quality toy. PicoBong has a much better price point, making it very affordable. It is not such a great price that I would highly recommend it, thou. The Koa ring is fun as a vibrator. I just wish they wouldn’t have marketed it as a cock ring. Someone with no experience with cock rings may just give up after trying this! It is a complete fail for us a cock ring and it isn’t very strong. I liked that this toy is waterproof, nearly silent, and had a lot of variety in vibration patterns.

I am only giving it 3 out of 5 stars. It doesn’t work as intended and that is kinda bogus!

The Picobong Koa is available at HedoVibes.

I received this product free of charge in exchange for an honest review. This review is in compliance with the FTC guidelines.